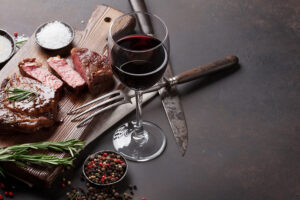 Winter’s last gasps make the perfect excuse for a simple weeknight meal of meat and potatoes, or an exciting spread surrounding a weekend roast. Tender beef and succulent sides provide all the comfort you need for snowy March days during the final cold snap before spring’s warmness. They also provide one of the best accompaniments for full-flavored Cabernet Sauvignon.

Cabernet Sauvignon Primer:
• The grape was developed in France when they crossed Cabernet Franc + Sauvignon Blanc in the 17th century.
• Relatively easy to grow, the grape is now grown in every major wine region
• A classic Cabernet Sauvignon will be full-bodied with high tannins and acidity
• Those high tannins and acidity give it an edge when it comes to aging.
• Cooler climates produce more blackcurrant, green bell pepper, and minty herb notes.
• Warmer climates produce more black cherry, black olive, and jammy wines

Cabernet Sauvignon is savory and luxurious. It’s most famously known for being one of the main grapes in Left Bank Bordeaux where some of the world’s most expensive wines are made. The tannins and acid help cut through the richness of the meat and decadence from the potatoes. Meanwhile, the vegetables pull out the herbal and vegetal notes. For these meals, you’ll want a slightly aged French Cabernet Sauvignon or a young one from Napa Valley. A few to look out for are Bordeaux’s Château de Braude and Château d’Issan, plus California’s Mira Winery and Rock & Vine.

Weekday Steak Dinner
Try the New York Times’ classic Cast Iron Steak recipe that takes all of an hour from fridge to table.
Before you start the steak, cut up some potatoes and give them a roast in the oven (here’s my tried-and-true Ina Garten recipe).
And while the meat is resting and the potatoes are finishing, pull together Epicurious’ Green Salad with Orange Vinaigrette.

Weekend Roast
A relaxing weekend means time to throw a roast in the oven in the early afternoon and barely having to touch it until dinner. The New York Times’ Rib Roast of Beef recipe has been making the rounds for a decade because it really is one of the best.
That extra time in your afternoon means stepping up your roasted potato game. Serious Eats’ Kenji Lopez-Alt married Hasselback potatoes and Potato Gratin in 2013, creating one of the best potato dishes the world could ever want.
Balance that cream and indulgence with Saveur’s Cooked and Raw Winter Salad.
Or, if potato gratin is just a bit too much, Saveur also has a great recipe for golden yellow and gingery Aloo Masala.