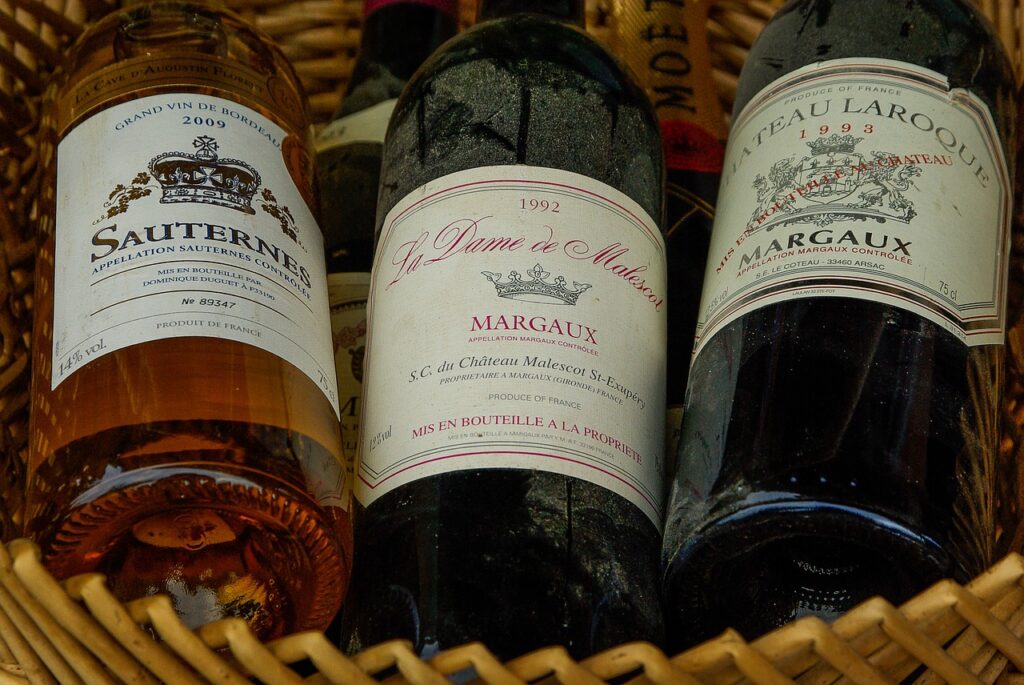 Quick! Think of an area associated with wine! What came to mind? Maybe Napa in Northern California? The eastern end of Long Island? Or Champagne in northeastern France? Or Burgundy? Or quite possibly, the famous French coastal region that’s been growing grapes for hundreds of years, Bordeaux.

Few places in the world have such an intense history with wine as Bordeaux does. The region is marked by the Garonne and Dordogne rivers, who flow northwest into the Gironde River and out to the Atlantic Ocean. All four bodies of water help create one of the best environments for vineyards. Of course, having such a history means that now the region has various appellations and classifications. This can help you figure out what to buy, but also acts as a big point of confusion.

Concerning the classifications, here’s what you need to know: the first round of organizing the producers (there are now 7,000+) came in 1855. The four best wineries (there are now five) were given the honor of “Premier Cru” or First Growth. The rest of the notable wine fell into one of four ranks. Except more than a few appellations were left out, so some created their own classifications in the 20th century or opted out of classification entirely. The Premier Crus, by the way, are incredibly expensive, so if you ever have the chance to drink one, do it. 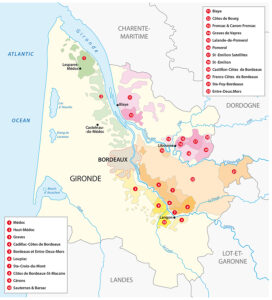 Of the 60 different appellations, there are a few to look for. Going along the Garonne and Gironde rivers aka “The Left Bank,” it’s Graves, Sauternes, Pessac Leognan, Haut Médoc, Margaux, St-Julien, Pauillac, St-Estèphe, and Médoc. From over on the Dordogne, “The Right Bank,” there’s Fronsac, Côtes de Bordeaux, St-Émilion and Pomerol. Knowing the difference between Right and Left Bank is vital. That lets you know some basics about the wine you’re about to buy.

When it comes to red wine, Left Bank is dominated by Cabernet Sauvignon-based blends. If you like tannins, you’ll want to seek out Left Bank Bordeaux. But, keep in mind almost everything from Bordeaux is a blend. So Left Bank reds will include Merlot, Cabernet Franc, Petit Verdot, Malbec, and/or Carmenere to round out the desired deep, dark black currant and blackberry flavors. For the record, all of the Premier Crus are found on the Left Bank. The Right Bank though loves to use fruity, cherry Merlot as their base before adding in Cabernet Franc, Cabernet Sauvignon, Malbec, and/or Petit Verdot. For either Left or Right Bank, red or white, you’ll usually be paying at least $30 and prepare to shell out $50-60 per bottle. Producers to look for are Château Larrivet Haut-Brion, Château Belgrave, Château Poujeaux, Château La Gaffelière, Château La Cabanne, Château Léoville Barton, and Château Marquis de Terme.

White wine is harder to find but worth seeking out. You may have recognized the name “Sauternes” because that is a very particular sweet white made from Muscadelle, Sauvignon Blanc, and Sémillion and tastes like healthy trail mix i.e. nuts laced with tropical fruit. Those three varietals are the primary white grapes for the region in general. For regular non-dessert wine, look for ones from Pessac Leognan and Graves. Their citrusy whites have great complexity and can get very minerally, if you’re into that. Château Carbonnieux, Château Guiraud, Château Malartic-Lagravière, and Château Suduiraut are all getting high marks from the critics.