Montreal almost shouldn’t be a gourmand’s dream destination. With the bitter Canadian cold lasting for half of the year, the growing season is shorter than anything we have in the States. And yet, they have an abundance of fresh produce year-round—Montreal is home to the world’s first commercial greenhouse, Lufa Farms, after all—and seasonal produce is always an inspiration to chefs. Secondly, despite its French origins and any epicurean heritage that may come with being New France, Quebec was brought into the British fold in 1760. And yet, it fiercely held on to its European feel, with many equating a visit to Vieux-Montreal, or Old Montreal, as being in a “little Paris,” and now the city’s food scene rivals that of their old French capital.

Breakfast in Montreal can go Old World or New. Distinct reminders of the old French days are exquisite croissants and breakfast pastries found throughout the city, some of the best to be found in North America. Or you can head to artistic Mile End to try the famous Montreal bagels. Lunch can be French-chic healthy, Canadian versions of American classics, or outstanding market stalls. Dinner is when Montreal’s gastronomic reputation is fully realized, and where you’ll want to go ahead and splurge a lot. 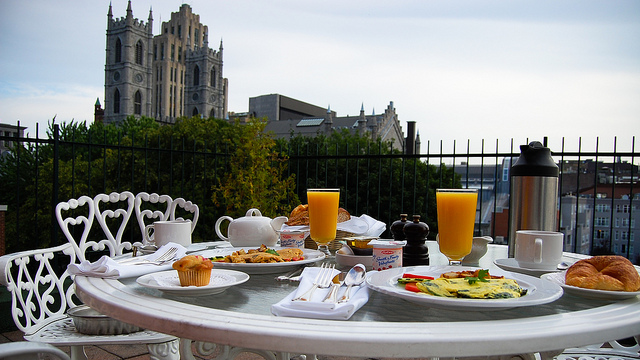 Maison Christian Faure (355 Place Royale) – No stay in Old Montreal is complete without a trip to the French-style pastry shop Maison Christian Faure. Opened in 2013 by pastry chef and Meilleur Ouvrier de France (MOF) Christian Faure, the bright and sleek shop turns out classic French pastry including flaky, buttery croissants so divine you won’t mind the mess of crumbs down your shirt. Be sure to pick up some confiture; each jar is filled to brim with chunks of fruit and reminds you of how great jam can be. 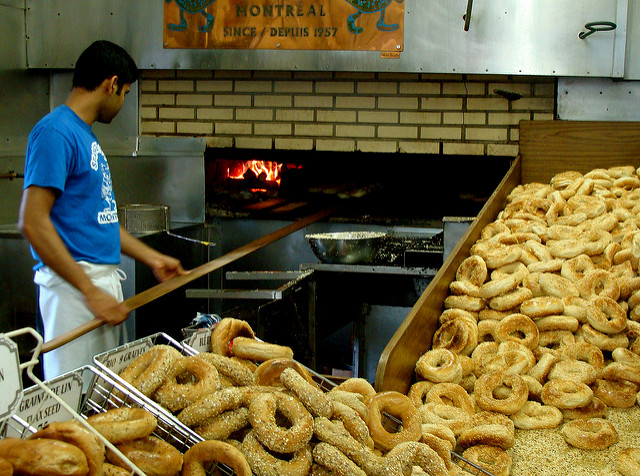 Bagels in Mile End – The Jewish population that settled in Montreal does things a little different than their brethren to the south. Montreal-style bagels are formed smaller, boiled in honey-sweetened water and baked in wood-fired ovens. And you don’t slice them! You dip them in cream cheese or whichever topping you pick up at the shop. Be careful when asking which bagel is better: St.-Viateur (263 Rue Saint-Viateur Ouest) or Fairmont (74 Avenue Fairmount Ouest). Your best bet is to get one from each and compare for yourself while walking around the neighborhood.

Olive et Gourmando (351 Rue Saint-Paul Ouest) – One of the most popular breakfast and lunch places in Montreal serves lighter fare like chia pudding, quinoa salad, and a vegan sandwiches, right alongside a hearty Cubain (pancetta, roasted pork and raw milk Gruyère) and thick-cut French toast (theirs comes with whipped labneh and a nut crumble).

Uniburger (302 Rue Ontario Est) – Burgers are definitely all-American food, but that doesn’t mean they haven’t crossed the border. This shop, conveniently located in the Quartier Latin by Université du Québec à Montreal (UQAM), is cooking up fare reminiscent of the West Coast cult favorite In-N-Out. Thin, lightly sliced patties griddled in the back, topped with a thick slice of American cheese, lettuce and tomato on a toasted potato bun, a side of piping-hot, crispy fries, and a creamy shake because you’re on vacation. 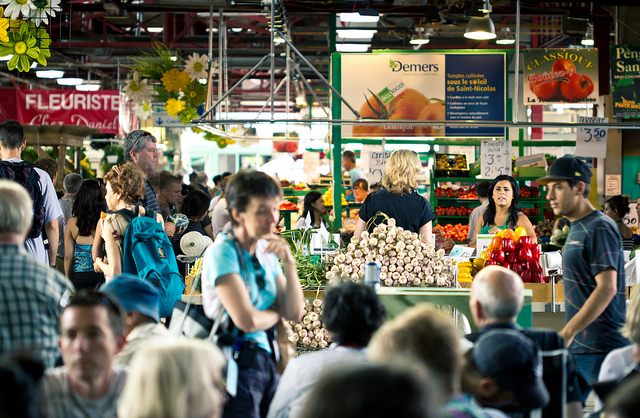 The Jean-Talon (7070 Avenue Henri-Julien) or Atwater market (138 Avenue Atwater) – Hot or cold, winter snows or summer sun, the Montreal farmers markets are open for everyone to peruse their bounty. Both ever-popular Jean-Talon and smaller Atwater are to-visits. Jean-Talon features a number of food options including the fantastic al pastor tacos from El Rey del Taco, the vegetable samosas from Le Tartarin, and Portuguese natas. Atwater, though, features the Satay Brothers and their Singaporean street food during the warmer months (they also have a brick-and-mortar close by). Both places have plenty of options for quick meat and cheese sandwiches. Plus, you’ll be able to pick up a can or three of maple syrup to bring home.

Sumac (3618 Rue Notre-Dame Ouest) – This two-year-old Middle Eastern restaurant has been garnering acclaim from Montreal’s top chefs and critics. Chef Raquel Zagury creates traditional dishes, such as pita with dips like hummus, labneh, or baba ganouj; falafel, shawarma and sabich as platters or sandwiches; all in an airy, relaxed setting perfect for a break in a busy day. And no matter what you get, you should pick up an order of the tangy-sweet amba (pickled mango, fenugreek, and mustard seeds). 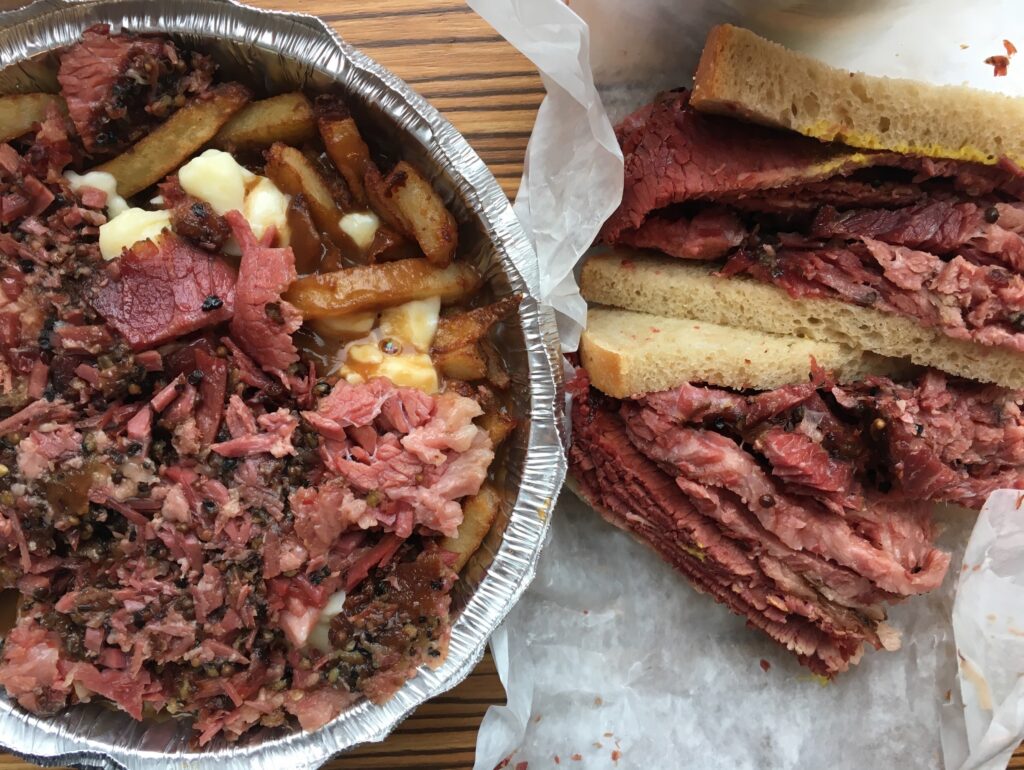 Schwartz’s (3895 Saint-Laurent Boulevard) – The second debate you’ll get into with Montrealers is Schwartz’s vs its across-the-street rival The Main. But Schwartz’s is the original, the one with more acclaim (and longer lines). Forget the main restaurant, head into the smaller café (to the left of the front door), get your order—that would be smoked meat poutine and a smoked meat sandwich—at the front counter, and take your time eating one of the best sandwiches known to man.

Joe Beef (2491 Rue Notre-Dame Ouest) – Dinner is where Montreal relishes in its own gluttony and Joe Beef is its headquarters. Chairs and tables fill every snug corner and nook of its two homey reclaimed-wood-full rooms, while the walls are decorated with the knick-knacks and a buffalo head, all giving you the feeling of a turn-of-the-century Quebecois hunting lodge. There are seasonal dishes like wild boar with rhubarb, cauliflower gratin and the holiday time Yule log, but the dishes to not miss are the Lobster Spaghetti—coils of noodles smothered in rich, creamy bacon-flecked tarragon sauce entangling chunks of lobster meat and shell-on lobster tails—and the Lamb’s Neck—tender, flavorful meat resting on cheesy polenta. And don’t miss dessert! They’re churning out bowls of perfectly light and smooth soft-serve that would make Mr. Softee himself cries tears of joy. Just make sure to get a reservation weeks ahead of time (two months is preferable), even if you’re a single diner.

Au Pied du Cochon (536 Avenue Duluth Est) – Now in its 15th year, it’s hard to imagine the Montreal dining scene without Martin Picard’s masterpiece—the man single-handedly brought back the rural classic, poutine. The menu is still a veritable celebration of rich Québécois fare with foie gras, pork and maple prominently featured. Consistently ranked as one of the best restaurants in the world, it should always be a stop on any Montreal itinerary. 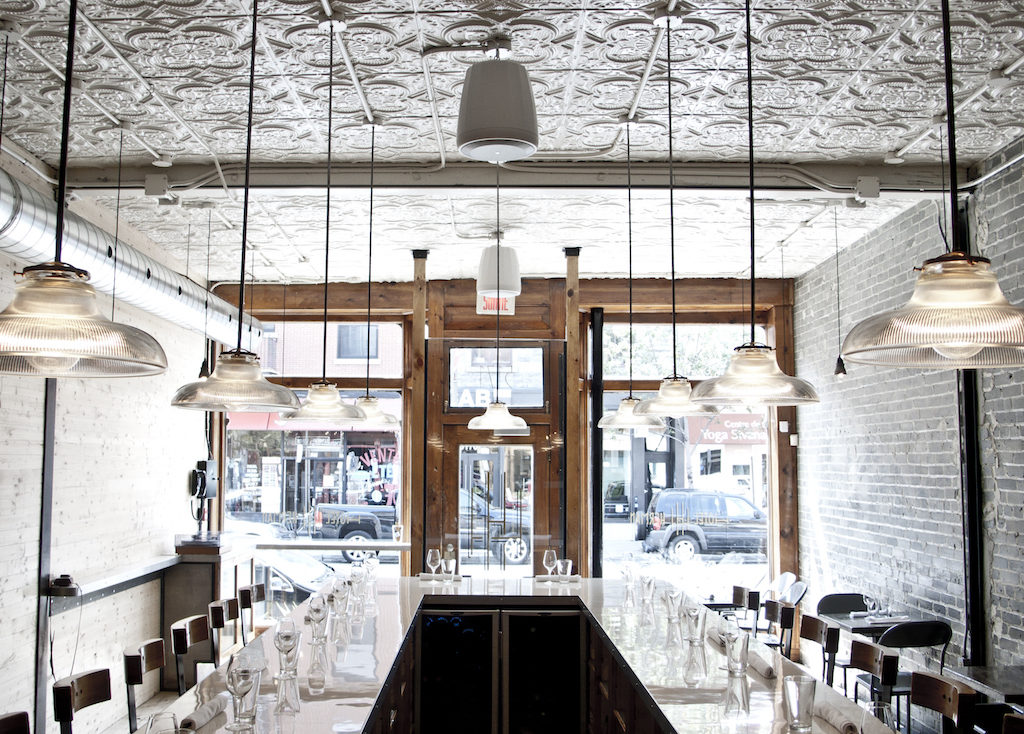 Hôtel Herman (5171 Boulevard Saint-Laurent) – There is a movement for more contemporary meals, and Hôtel Herman with its nouvelle cuisine represents the next big thing in Montreal cuisine. Chef Marc-Alexandre Mercier has been getting noticed on both sides of the border for his beautifully plated, but unusual dishes like cucumbers with an oyster emulsion or sweetbreads with sunflower seeds. And there’s an extensive small-producer wine list to match.

Le Vin Papillion (2519 Rue Notre-Dame Ouest) – The newest addition to the Joe Beef family, Le Vin Papillion is where wine director’s Vanya Filipovic’s bottles shine. Grab a seat at the bar and examine the day’s chalkboard for a selection, or allow the bartender to walk you through what’s available. Highly recommend going at 3pm when they open pre-Joe Beef dinner. 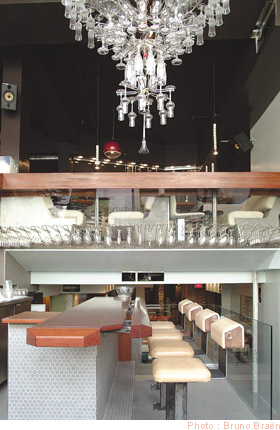 Pullman (3424 Avenue du Parc)– Whereas Au Pied du Cochon ushered in a new era for Montreal’s eaters, Pullman brought a new era for Montreal’s drinkers. The deep wine list offers some of the best French vintages available (select wines from other European countries & the New World do make appearances), and the spot has become so well-known, bar reservations are often encouraged for weekend-goers.

Rouge Gorge (1234 Avenue du Mont-Royal Est) – Sometimes you’re on vacation and want to relax in a quieter wine bar setting, maybe the newcomer with live jazz, open windows and plenty of locals. Owner Alain Rochard is known for his wine expertise and here, he showcases a unique list of privately imported vintages, and the food, prepared by his son Julian, is excellent enough for a second dinner.