Of all the mini-revolutions that add up to the BIG food revolution we have here in this country…it is produce that drives the food truck. We ain’t called The United States of Arugula for nothing! And, yes, I would say that the one iconic attention-grabber in America 2014, right at the heart of it all, is greens: we’ve gone from iceberg-y and dismal way back when…to a mind-numbing, almost incomprehensible muchness now.

With these historic thoughts on my mind—(in the upcoming first issue of the new ROSENGARTEN REPORT due on Dec. 15, 2014, I will offer my State of the Onion address: what we’ve come to in American eating, and is it good or bad?)—this weekend I decided to head on down to NYC’s largest Farmers’ Market, the sprawling one at Union Square. And I decided to pursue the greens of late spring/early summer only. Needless to say, I was overwhelmed. Some stands offered 30 different kinds of greens (not all lettuces, but all intended nevertheless for your world-beating 2014 salad bowl.)

I came away with, yes, an expensive bagful, but also lots of new tastes, and lots of new knowledge…and one overarching practical thought, that I’m passing on to you as quickly as possible. If you’re like me—a lover of exotic greens for salad, but not always a lover of greens that are coarse, or tough, or leathery—wow! This is our season! I tasted over 50 soft, adolescent, frilly things that are perfect for salad bowls right now.

This simple truth was not surprising I guess, but I hadn’t focused on it before: late June/early July is to greens, I now believe, as early September is to tomatoes!

The following report gives you some of the “green families” that seemed to be leading the way at most stands…the greens of the moment, if you will. In some families I found disappointments…but I also found some knockout successes, greens that I will keep buying until the onset of “coarse green” season.

We all know it…kale is the “it” green of the moment. I think great chef Ignacio Mattos ignited the trend, when he was cooking at Il Buco almost a decade ago (he now has a new place in the East Village called Estela). Mattos made a Zuni-Café-style Caesar Salad from raw kale—much-discussed among chefs—and the leaf took off, making an appearance in trendy kitchens everywhere. I’m even cooking with it, for chrissakes—mostly putting it in my green “health” drink made in the Vita-Mix. Sometime traditionalist that I am, however, the rough kale texture never was my #1 choice for salads. Until this weekend! I saw so many varieties of kale, and tasted so many differences! It came down to this: if a kale variety has much of that earthy-green kale taste, and is a soft cooperator in the salad bowl…I’m in love!

From the churning chamber of Kaledom, I found one type that I loved above all—because it had both great flavor and great textural compatibility, the softest of them all: 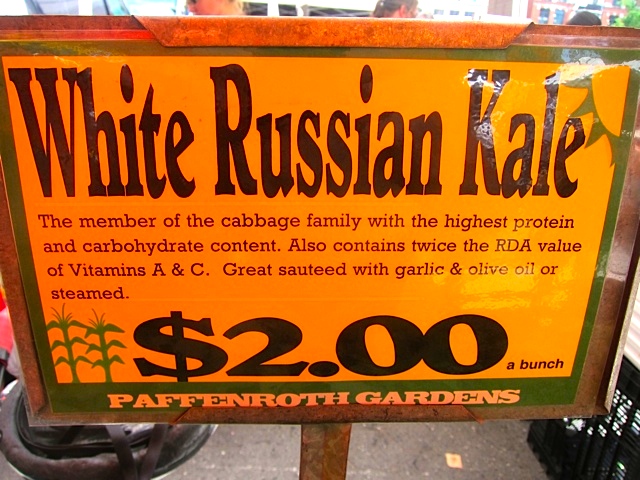 At the same stand (which claims to sell seven different kales), there was also this: 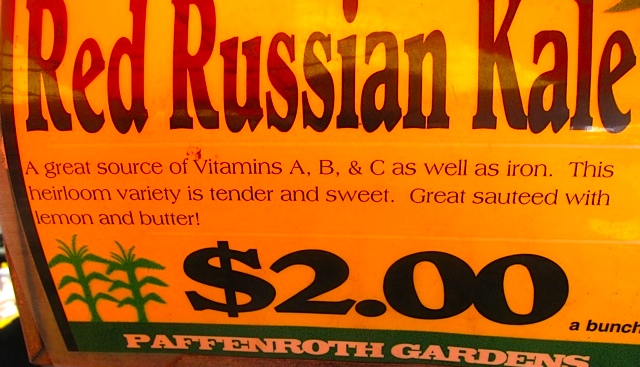 But the Red Russian was not quite as tasty or as texturally sexy as the White Russian!

THE MUSTARD GREENS FAMILY
I love this family too. I always buy mustard greens in Chinatown for stir-fries, and I always like to pinch a few leaves to go into the salad bowl. A little bit of mustard green ennobles every green partner with its snappy spiciness.

Once again, however, I sometimes find the carrier too thick and coarse. One of the things I discovered this weekend…if you can find frilly mustard greens, that problem is over. Frilly mustard greens seem to have been MADE for the salad bowl!

My favorite one of all is known as Golden Frills Mustard Greens.

I also very much liked a large-leaf mustard green: 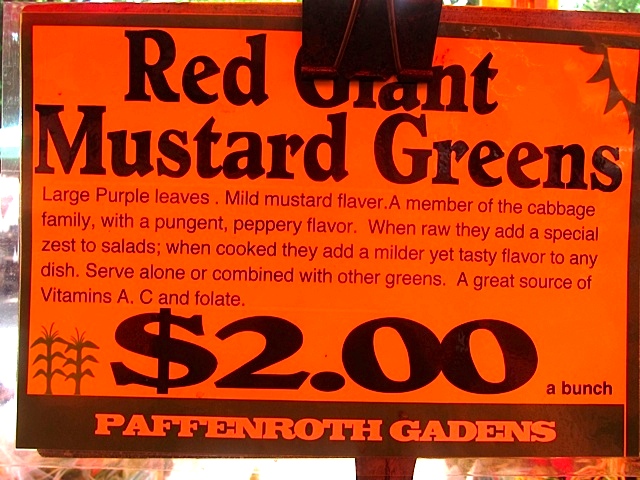 Absolutely wonderful as a salad-builder.

THE DANDELION FAMILY
The market is filled with dandelion leaves right now. It’s early summer! I found lots of pleasing textures…but I tasted, and tasted, and could not find flavor that pleased me. Most samples were simply bitter. My inescapable conclusion: the gourmet’s revered dandelion leaves of spring…a thing of nostalgia, perhaps…has been outstripped by so many other tastier things that are now available. I did decide, however, that I would use the following for a bit of color in salads: 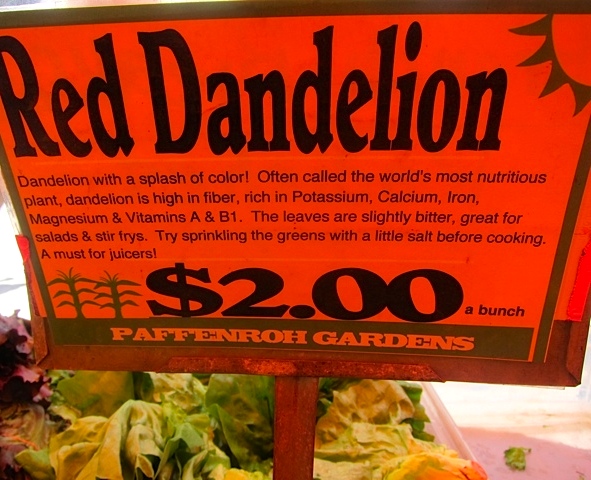 THE FRISEE FAMILY
Frisée in the salad hit our shores about 25 years ago, with the rise of the French-bistro-style frisée salad, replete with lardons and maybe a poached egg on top. I’ve always loved the sneaky bitterness of these frills…if they’re fresh and juicy enough. All too often what you see at the “gourmet” grocery is the white base of the plant with a red, decaying ring around it (a little bit is normal). At the market this weekend I saw delicious, fresh frisée that had tenderness all the way up into the green leaves.

PUNTARELLE
This has become another “it” green…fueled by hordes of American travelers come back from Rome, where they tasted, in winter, the long, long leaves (about two feet from top leaf to root) called puntarelle. The plant, a relation to Catalan chicory, grows nowhere in Italy other than Rome. There is an elaborate preparation to “tenderize” it, and a gorgeous dressing featuring raw garlic and anchovies. I’ve had the Rome experience, and it’s grand. In the U.S., my experience usually involves tasting a little at the Farmers’ Market, which is usually a disappointment, mostly a mouth of bitterness. If you buy it, say I, go all the way with the Roman recipe (available on the internet.)

THE LEAF LETTUCE FAMILY
OK. Simply too many out there to cover. But I would like to put in a word for one of my faves, Lola Rosa; I picked up a head at the market and it was a star of my salad. I like its small size (something like a Boston lettuce), the way it chews when you roll a leaf or two up, and I love its color. I often pick Lola Rosa as the “green” to add a splash of “red” to a salad. Low-key in flavor, but juicy-rich in texture. 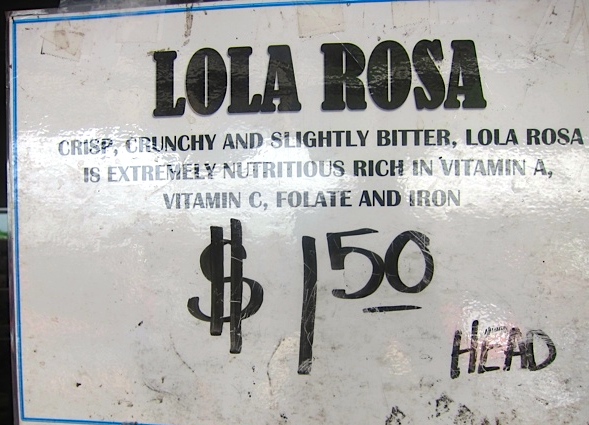 ARUGULA
Well, no one needs an arugula alert—it’s bloody everywhere now! But it doesn’t hurt to give you an image for its flavor, so you can discover it all over again in your mouth: I think it tastes like peanuts! And then of course there’s the “spice”…which sometimes registers as quite hot! I’ll never forget the greatest arugula I ever tasted…it was in Puglia…in a parking lot! A group of food & wine writers (including me) were working our way across the lot…when super-knowledgeable Michele Scicolone looked down, noticing some shoots of arugula growing through the cement cracks! “Taste that, taste that,” she practically shrieked. “That’s the best variety of arugula, and it’s growing wild in this parking lot!” She was right: tender leaves, with a ton of the peanut-flavor, and not too much mouth-burning heat. It was practically the opposite of what I usually find in the supermarket today: tough, too-old, leathery leaves, with more burn than flavor. The farmers’ market is your best friend in this pursuit…particularly in the early part of the season!

PURSLANE
I owe it all to Paula Wolfert…whose fattoush salad, of Middle Eastern origins, brimming authentically with purslane, first caused me to fall in love with purslane. At its proper stage, it is crunchy little red stems, topped with little green leaves. There’s a wild green taste, earthy and beet-y. Juicy crunch initially, but then the big event occurs: these crunchy sprigs, to an even greater extent than mache, turn creamy-mucilaginous in your mouth! An extraordinary addition to an everyday salad!

THE “SPROUT” FAMILY
Well, it’s not really a family…but it may as well be. You know the impulse for chefs: “I’m gonna find me something in the sprout stage that will yield tiny, sexy bites for my salad.” The way things have evolved…it could be sprouts of almost anything. There’s no doubt that at the farmers market last weekend, the most eye-catching, mind-engaging displays were various type of sprouts And some of them crazily delicious! Of course, many of them are also crazily expensive. One of my favorite sprout specialists, Windfall Farms in Montgomery, NY, is selling many sprouts right now at the same price: a mere $48 a pound! But 4 bucks worth of this-and-that can surely be worth it.

I was wildly attracted to the concept of buckwheat sprouts…

…but I found the flavor way at the bottom of the sprout continuum.

A big step up was beet sprouts, marketed as… 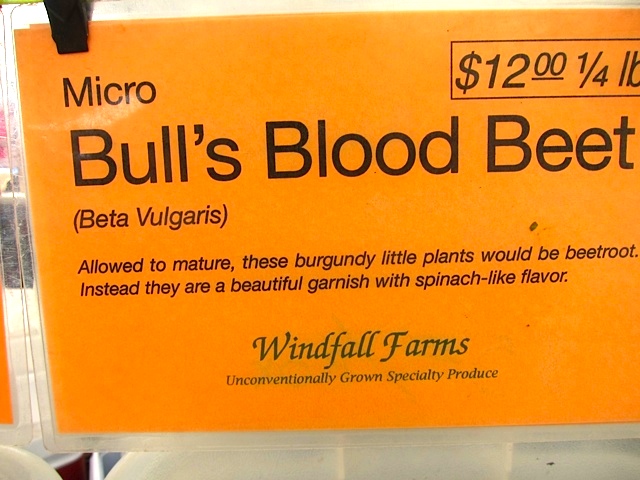 Next up the chain for me was…

These winners have an almost bubbly, pop-in-your-mouth quality. And the flavor is deliciously earthy! There’s even a touch of astringency in the finish, lending interest.

And now we get to my faves of the day! I LOVE the full, spicy flavor of radish sprouts. These were good… 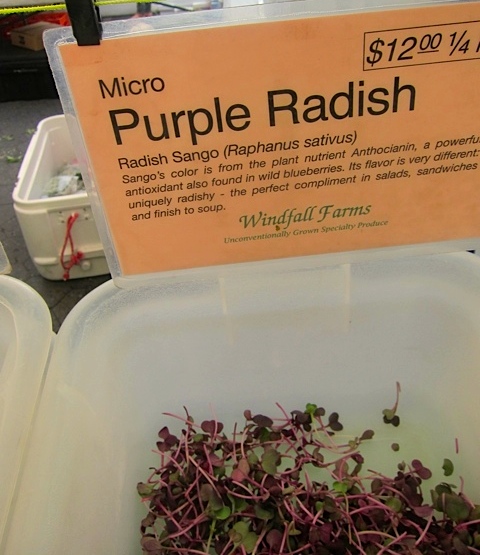 But these Hong Vit radish sprouts were even spicier, fuller, more complex! 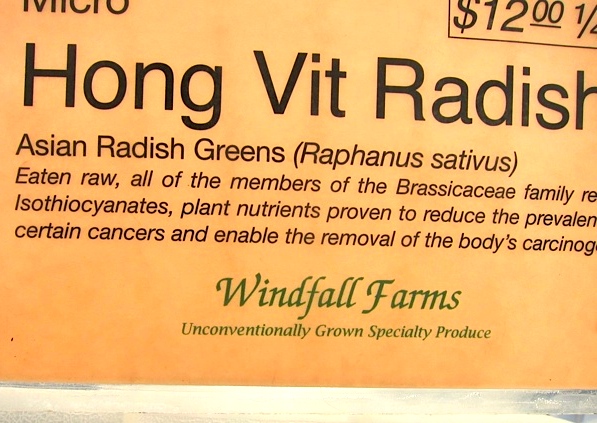 What an amazing seasoning this is for salads! Small leaves growing out of thin red stems…exploding with radish flavor…hot, but not too hot!

And for closers, at the bargain price of only $36 a pound, were these… 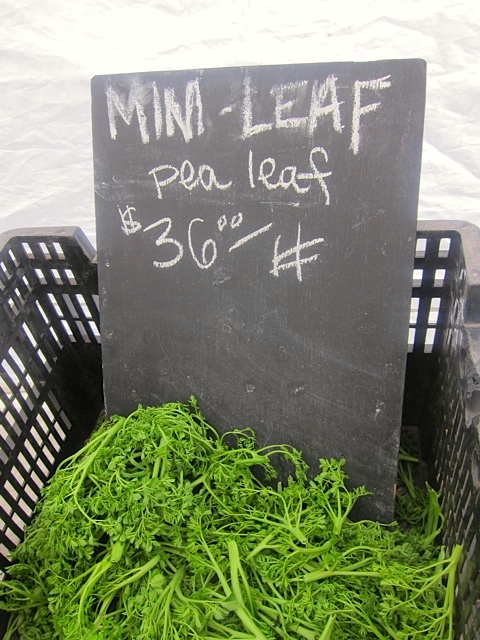 Wow! I’m used to the larger ones for stir-fries with garlic. But these tender, frilly leaves…which taste amazingly like peas…are great in salads! And if you chew it all, including stalks, it almost has the texture of tender pea pods. A great treat for the mouth.

Where will it all end? It won’t! It’s endless! At my last farmer stand visit, I found this: 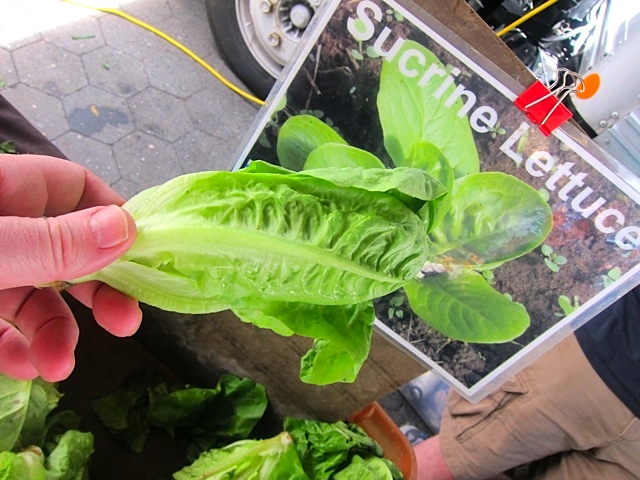 I asked the farmer what Sucrine Lettuce was. He thought a moment, then gave up. “Aaah…it’s just lettuce,” he said. Even the farmers are finding the detail overwhelming!

I can tell you what overwhelmed me. That night, I laid all of the purchases out on my counter, along with a few, early-season, heirloom tomato varieties (small ones). I grabbed a big salad bowl, and started ripping leaves and stems and sprouts to mix together in the bowl, along with quadrants of multi-colored tomatoes. Vinegar. Olive oil. Salt.

The result? Possibly the greatest salad I have ever had, all due to the seasonal quality of the ingredients. I urge you to get to the market in this season…and whip up one of your own unforgettable salads!

WINE MONDAY: David’s Wine of the Week
The Perfect Gin & Tonic: Which Gin, Which Tonic, Which Recipe, Which Secrets