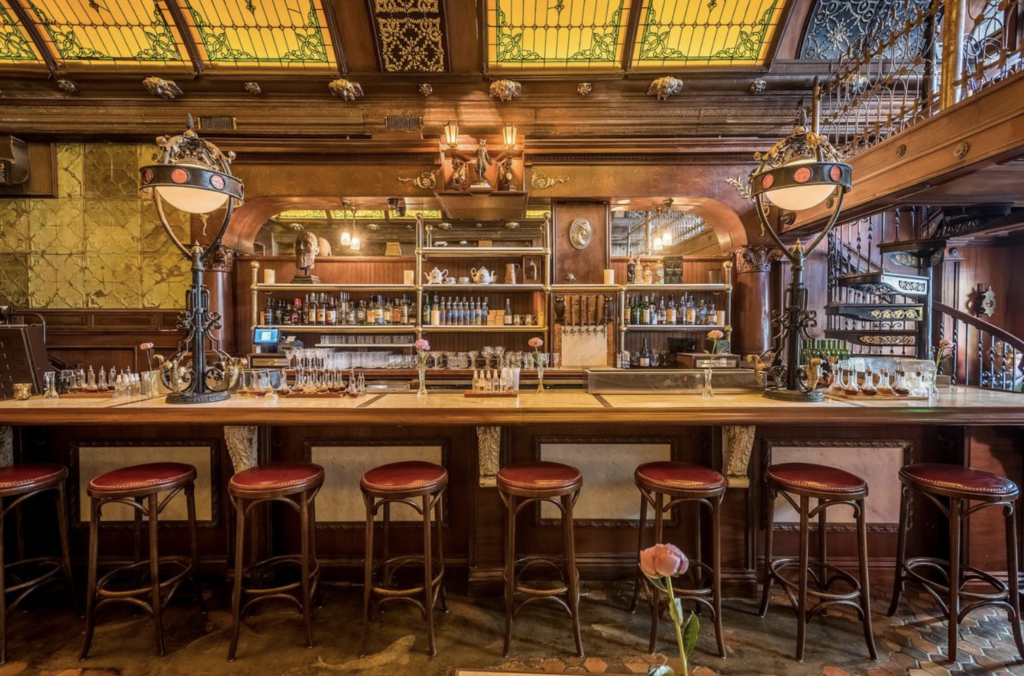 Sometimes, even a Wine Rep needs to get the hell out of dodge. Case in point (pun intended): a couple of months ago, immediately following the holiday crush of wine sales for accounts in need, and with a little thing we East Coaster’s know as the Polar Vortex looming on the upcoming forecast, I decided it was a good time to split the town/island of Manhattan for my previous adopted home of California. Specifically, Los Angeles, which, as the song goes, is home to swimming pools, movie stars…and, and bars?! Yup, that’s right, LA is bar heaven. Actually, it’s also, bar hell, and everything in between with a history rich in alcohol, and for that matter, alcoholic, tradition, from seedy East-side dives where the likes of the legendary scribe and barfly Charles Bukowski frequented, to upscale West-side hotel lobby dens enveloped in smoky wood, and views of the shimmering Pacific.

And then there is downtown, or as the real estate folks, ever in search of a trendy user-friendly acronym like to refer to it now, DTLA. 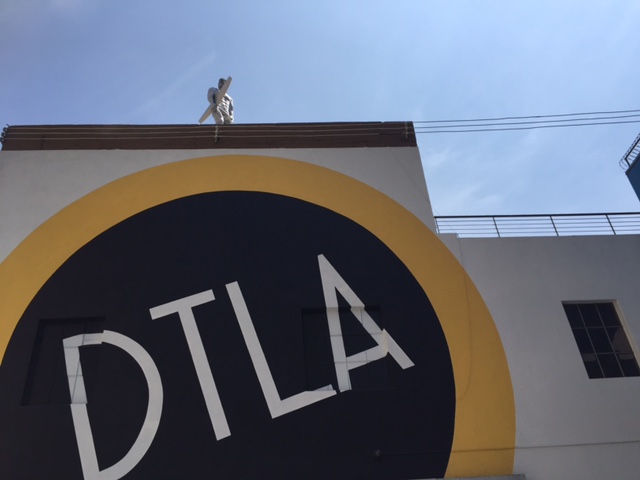 Back in the Golden Age of Hollywood, DTLA was a mecca for the pioneering-era movers and shakers (pun not intended) of the burgeoning film industry, i.e. the plethora of producers, screenwriters, stars and starlets that enjoyed tilting an elbow while then pen gets signed on the dotted. But like everything else in this knock down, drag out, fickle world, things change, and many years later DTLA had been better recognized as a desolate wasteland of industrial sprawl populated with old, decrepit buildings, and a seemingly never-ending tent city better known as skid row.

But, just like what had transpired before, the pendulum has somehow swung back around again to see DTLA  thriving and bustling with new businesses, restaurants, and yes, bars.

Tucked into the seam of the legendary Hotel Alexandria, which first opened its doors in 1906, The Wolves seeks to capture and incorporate some of that vintage Angeleno charm into the folds of its own elegant, art deco’d walls. Not to mention adding it as a necessary ingredient into every drink recipe. And make no mistake, if there are the two things The Wolves is all about, it’s the beauty of the space itself  (it recently received Designer Of The Year Award by Eater, LA), and the precision of its well thought out and expertly crafted cocktails. 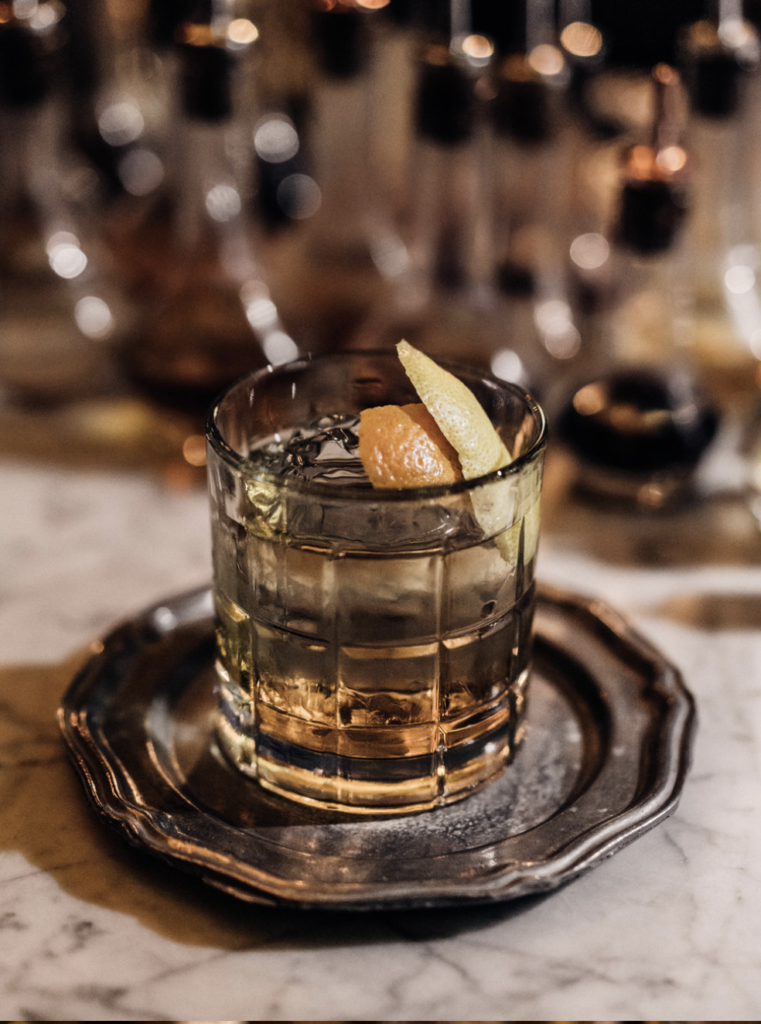 One afternoon while on my visit, I decided to saunter in and have a sit-down with the bar’s two main creators (Co-Owners Al Almeida, and Daniel Salin, respectively), as well as the mad scientist behind all the dreamy concoctions, Beverage/Bar Director Kevin Lee.

“What was the initial idea behind The Wolves?” I asked, as the four of us congregated in one of the bar’s front wooden booths sipping some of the liquid gold that Kevin had prepared for the occasion.

It was a sleepy Sunday afternoon, just a couple of days into the New Year, and just a few hours before the mixed crowd of happy hour regulars would begin to saunter in. The booth itself was originally from the 1920’s, and made out of mahogany, which Al and Daniel had spotted on Craigslist, and thusly, had transported all the way back to LA from Seneca, New York, which gives evidence to not only their attention to age-specific detail, but also is testament to their dedication to build a credible watering hole steeped in authenticity.

“We wanted to stay true to the original spirit of The Alexandria. Back to the time when the film industry was just beginning to carve out its identity here downtown,” said Daniel, whose side gigs as an Art Producer and Set Designer have impacted the look and feel of the place. He paused, and took a sip of his drink, a Banana Manhattan (Wild Turkey 101 Bourbon, Fermented Bananas, Sweet Vermouth, Orange Liquer, Plum Bitters), before adding, “the idea was to create a space that would transform you to another time and place.”

Looking around, surveying the lay of the handiwork, I’d say, mission accomplished in spades. Pausing a moment between sips of my Spicy Pineapple With Smoke (Ilegal Mezcal, Fermented Pineapples, Passionfruit Liquer, Chestnut Bitters, Habanero Bitters, Fresh Lime), I glance up to find probably the most impressive visual of all: A stained glass skylight that had been dropped in—the thing is, there is no sky to be seen. The cavernous light that encases the entire space in a cathedral glow is really emanating from hidden LED lights, as the Wolves is on the ground floor of the building. But you’d swear that this golden sunshine illuminating the room, bathing all that it touches in a gentle and healing warmth and softness was pouring in from the heavens above. That’s what happens when the glass originates from a train station in Paris, Illinois circa 1880’s. 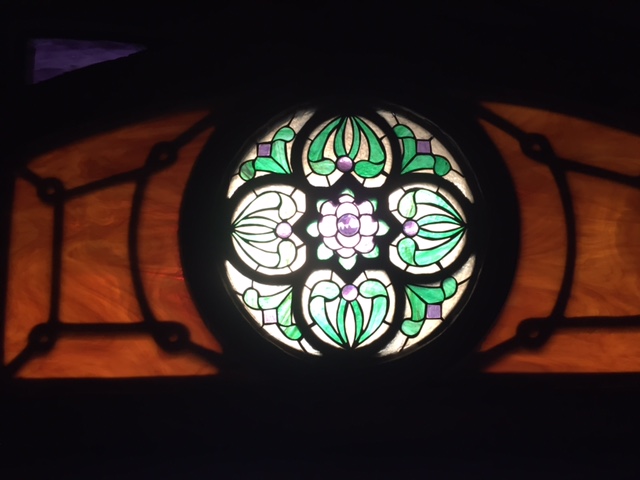 Gazing further, I find another magnificent feature of the bar,:its one-of-kind balcony. Typical of turn of the century in design and complete with a picture window, also made out of mahogany, this, I learn from Salin, was fabricated on-site. The effect brings to mind another city: Close your eyes, and then re-open them, and you might think you’re sipping your beverage in old-time New Orleans. Only, you’re not in NoLa at all, but rather, you’re looking out onto South Spring Street, and the heart of LA’s Downtown Arts District, less than a rock skip away from The Los Angeles Theatre Center.

“What was in this space before you guys built the bar?” I put to the group.

“It was an old print shop,” Al chimes in.

And call me crazy, but taking in all the authentic fixtures, moldings, and really, too many other wonderfully quixotic bits and pieces that inhabit every nook and dark, shadow-y corner to name, it’s difficult to imagine that at one time, folks were standing over large run copying machines printing up their wares, rather than cozying up to expertly created cocktails and plates of charcuterie, or seafood pasta (yes, there is also a full kitchen that serves lunch and dinner, with brunch soon to follow in the coming weeks).

We pick up our drinks, and the three main Wolves lead the way past the main floor, and on to the upstairs area, where lies the not so secret bar within a bar, the Omakase-inspired, and extremely sultry and noir-ish, Le Neant, Al shares that the framework for this back bar came from his dad’s old 60’s Jersey one, “Al and Ozzy’s Lounge.” It is yet another piece that he and Daniel made the journey back East to obtain, and is wholly original.

Taking it all in, it is now time for Kevin, who used to own his own bar in nearby La Mirada, The Puzzle Bar, to takes the stage. 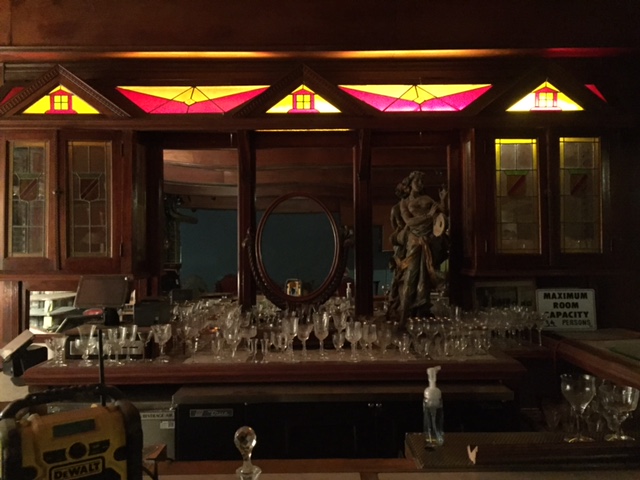 “With Le Neant, we offer a very, very special drinking experience. We like to go where nature takes us. As inconsistent as nature is.” He pauses. “Le Neant takes what we’re doing with The Wolves to the next level.” (Note that all amari, bitters, liquers, and vermouths are homemade using seasonal produce for both The Wolves and Le Neant).

He then talks about things like going to the Farmer’s Market daily to procure only the freshest of ingredients, things like oyster leaf. Things like using over a 100 varieties of mint. How all amari, bitters, liquers, and vermouths are homemade using seasonal produce for both The Wolves and Le Neant.

And then there are things like Fig Vermouth. The importance of Vermouth in general when it comes to crafting cocktails. “Vermouth is the very first alcohol. It originated in China over 9,000 years ago. It is an elixir and medicinal with healing benefits.” He then takes his place behind the bar and proceeds to fix me up with just such a healing serum—The Lavender Rose (Vermouth, Lavender, Rose, Hibiscus, Chamomile, Peach, Cranberries, Lemon Twist).

I take a sip, and right in that moment pounding the concrete terroir as a Wine Rep back in freezing cold NYC seems a million miles away.

The What: The Wolves, Neant

Overall Philosophy: “We wanted to stay true to the original spirit of The (Hotel) Alexandria. Back to the time when the film industry was just beginning to carve out its identity here downtown,” Daniel Salin, Co-Owner…

“We offer a very, very special drinking experience. We like to go where nature takes us. As inconsistent as nature is,” Kevin Lee, Beverage/Bar Director 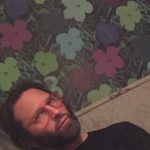 Peter “Blue” Zusman is an artist and wine & spirits enthusiast living in Manhattan’s Lower East Side. He places equal importance on both a finely-aged single malt and a medium bodied, earthy red. Summer is always about Provence. He was formerly a contributing wine writer at grapecollective.com.

Going Out for Tapas in Granada Means Ordering Drinks, Not Food
Everyone Loves Chianti: A Guide to the Tuscan Classic