If you’re traveling northwest Spain and find yourself gazing at Limestone cliffs towering dramatically over the Atlantic coastline, you have found beautiful Basque country. Thanks to the maritime climate, this region is cooler, damper, and greener than the other hot, arid parts of Spain. This coupled with the steep hills where vineyards are planted in terraces to drain the water, results in the production of the pride of the locals; Txakoli wine (pronounced Chock-oh-LEE). 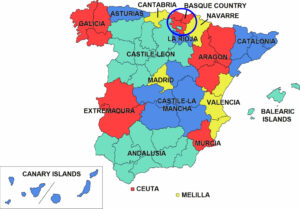 Called Euskadi by the locals, Basque is home to citizens who are fiercely proud of their unique regional identity. This is reflected in everything from their sports teams to their popular folk dances, music, and poetry. You’ll find signs and menus printed in the local tongue-twisting dialect Euskara alongside Castilian Spanish. “Tapas” are referred to as “pintxos” (peen-chos). And if you are lucky enough, you may even get an invite to socialize at one of the over 1,000 local gourmet societies, called ortxokos (or- chock-os).

The region’s close proximity to both the Atlantic Ocean and western Pyrenees Mountains, results in fishing and shepherding as a way of life for the industrious Basque. This is clearly reflected in their cuisine. Fresh seafood and savory fish stews are popular dishes as are the roasted lamb and nutty, buttery Idiazabal sheep’s cheese. With all that this unique region has to offer up, it is with pride that they share and enjoy all of it with their local Txakoli wine.

It’s a wine that may be hard to pronounce, but Txakoli is very easy on the palate. It’s a bone-dry wine that offers high acidity and minerality, low alcohol (10-12 percent), and a light effervescence. These are wines to consume young and fresh. The traditional way of serving Txakoli is to pour it from several feet high into a short cocktail glass to aerate the wine and release the bubbles. It’s a drinking rite of passage for anyone first tasting Txakoli, and a fun one taboot! 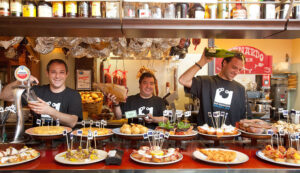 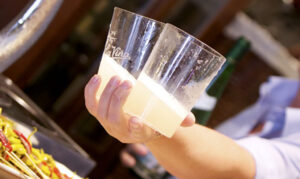 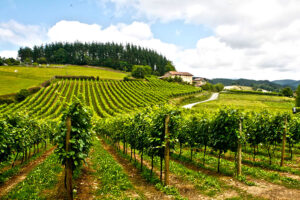 For a long time Txakoli was rarely found anywhere outside Basque country. But, many U.S. sommeliers who visited Spain to learn about its wines took notice. Today, more styles of Txakoli, from white to red and rosé are found on wine lists everywhere.

Gretchen Thomas, Wine Director for Barteca Restaurant Group in Norwalk, CT., oversees the wine lists for the twelve locations of Barcelona Wine Bar and Restaurants. Here is her take on Txakoli:

“Styles of Txakoli wines depend on the sub-region since they each have their own distinction that sets them apart. Getariako is the style that is most known and popular here, but Bizkaiko makes some of the more serious, age-worthy Txakolis. They aren’t carbonated, like the Getariako style, and they don’t necessarily need to be drank within the year of bottling.”

“ …Red wines are becoming available now, and they are elegant, spiced, and mineral-driven. These are more from the Arabako and Bizkaiko areas. There are also more rosé Txakoli in production in now. Five years ago there were only one or two wineries that were producing rosé; now almost everyone is making some version of rosé because it is so popular here in the states.”

If you are planning a visit to Basque country, bring an appetite as the culinary scene is anything but provincial. Depending on your vibe, there’s something for everyone.  There are casual pintxos bars bustling with late afternoon tapears (tapas crawls), seaside cafés serving the local fisherman’s catch (including the popular grilled Rodaballo [turbot]), and wildly creative Michelin-rated restaurants. In fact, four of Spain’s seven Michelin three-star restaurants are in the region: Arzak, Akelarre, Azurmendi, and Martín Berastegui. No matter which option you’re feeling, all are enjoyed with copious amounts of Txakoli.

You’ll never go hungry or thirsty in this region of Spain. And that’s something the Basque are truly proud of! 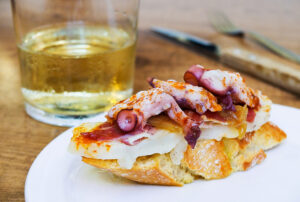